“Heat Wave” has some nice moments, but it’s up against a pretty strong season finale in “Five Stars for Beezus”, so it’s not really a contest. In the former, all things related to Winston’s cop voice is pretty hilarious and even the Nick and Reagan story clicks pretty well. “Heat Wave” could have probably made it at least another round against a weaker foe, but alas.

These match-ups are getting tougher. I like “Jeff Day” because they finally found a good balance with the Sam/Nick dynamic and I still have a soft spot for Rhonda. “See Ya” feels like the writers realized they were going to have a second season, so they needed to rock the boat a bit. The abrupt ending to the Schmidt/Cece relationship is clunky. I love the ending dance with Nick back in the loft, but it’s not enough to advance.

This match-up is a bit of a toss up. “Background Check” is definitely the more complete episode and generally much more lighthearted of the two. “The Box” deals with much deeper issues, like Nick’s irresponsibility with money and Schmidt’s quest to be a good person. But is it, you know, funny? I feel like I’m making some strange picks right now, but I’m going with “Background Check”.

“Table 34” is the clear winner here, even if it’s one of the weaker episodes during the post-Jess/Nick kiss arc. “The Crawl” has some good moments and the introduction of May is welcome. And the opening scene of “The Crawl” is downright hilarious. But it peaks early and can’t really keep up with a game-changing “Table 34”.

I like both of these episodes. “Bathtub” introduces Angie who I found to be an excellent addition to the cast. Winston and Jess put on not one, but two fake robberies to cover their bathtub mistake. It’s all a pretty good time. But I have to say that “Exes” is stronger and funnier overall. Adam Brody was so lovely hateable I wish he was a reoccurring character.

“Sister II” is a strong episode, but “Virgins” is one of the best. I enjoyed the entire Sister arc of New Girl and it’s tough to eliminate one here. Linda Cardellini is always great and has good comedic chemistry with the whole gang. Even Winston’s B-story, failing the police entry exam, is worthwhile. But is it better than “Virgins”? I think not.

This is another easy choice despite both episodes being strong. I’ll probably say that more and more as we advanced through this tournament. “Parents” (a Thanksgiving episode oddly not titled Thanksgiving) has so many funny moments. Rob Riggle is great as Big Schmidt and the dynamic between Nick and Jess’s mom Joan is hilarious. But “Clean Break” continues to hold a special place in my heart and it isn’t leaving yet.

“Cruise” is probably my least favorite season finale of New Girl. Again, not saying it is bad or it isn’t funny, but it all feels like an awkward Nick/Jess post-break-up adventure. It never quite hits on all cylinders. “The Story of the 50” is a strong Season 1 episode and “Cruise” doesn’t stand a chance.

I’ve always been a fan of Halloween themed episodes and the aptly named “Halloween” is a good showcase of the New Girl gang. Not only do we get some great costumes (Nick as Bea Arthur, Schmidt as Young Lincoln), but we also have the ending of two pivotal relationships. Nothing about it is bad, but I don’t think it lives up to “Shark” from when the show was truly in its stride. 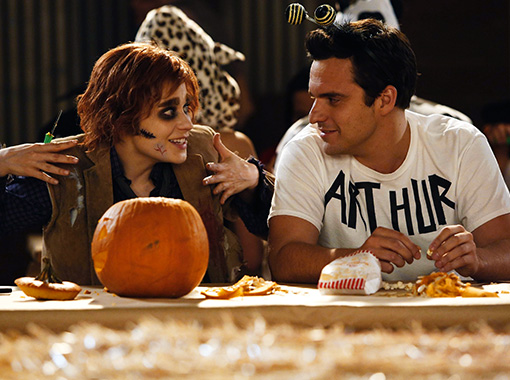 Episode Match-Up: “Cooler” vs. “A Chill Day In”

Oh man, I love “A Chill Day In”. As mentioned previously, it is easily the superior of the 2-parter and is also downright hilarious. High Jess is great and I’ll never not laugh at the “I feel like bakin’ love” song. Plus, we get the Winston and Ally kiss. That is why I’m so bummed it is being eliminated this early. “Cooler” is going far.

Episode Match-Up: “Raisin’s Back” vs. “Neighbors”

Anytime I have a later season episode advance over an earlier season episode, it feels like I’m doing something wrong, but I am going to do it again here. “Neighbors” has its moments. Nick’s overly elaborate prank on Schmidt to make him feel old is gold. It’s also the beginning of Winston not being good at pranks. But the neighbors themselves are pretty hateable and that doesn’t make it any more fun to watch. “Raisin’s Back” is a strong episode from Season 6 and it’s advancing.

Neither of these episodes are flawless, but I think “The Landlord” is an easy pick. “Bob & Carol & Nick & Schmidt” has a pretty wild plot, that of Nick’s family wanting him to be a sperm donor. It’s funny, especially the dynamic between Nick and Schmidt. And who doesn’t love Bill Burr? Even Winston and Cece shopping for a wedding dress is worthwhile. But despite all of that, I don’t think it beats out “The Landlord”. Plus, the title is way too long, am I right?!

Episode Match-Up: “The Apartment” vs. “Prince”

This is an especially tough one, because I think “The Apartment” is a pretty great episode. The Jess/Cece story is the least funny, but it has heart and we get Nadia’s origin story. Dunston, Winston’s new partner, is laugh out loud funny. And Nick’s “Oh, it’s just me who’s been flashed about 300 times” is classic. But can it beat out Prince himself!? Not yet. 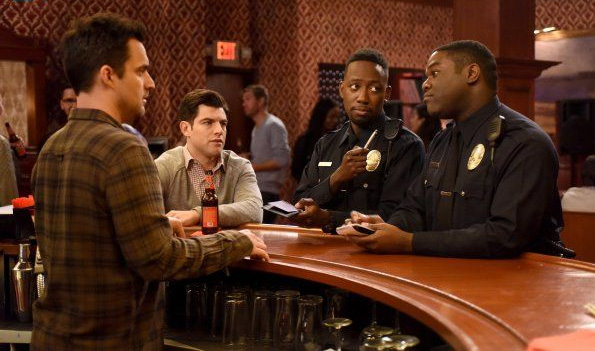 “Road Trip” is filled with quotable lines. “I must say, this is not my favorite sort of white people in here.” I also love “Where’d that little boy come from?” The climatic battle is great and who doesn’t love Rob Riggle? Yet, while “Swuit” isn’t perfect, I think it is still the stronger episode overall in terms of laughs.

“Young Adult” just isn’t that tight of an episode. I never liked the idea of Jess “trying to be cool” at school, at least not this late in the series. Schmidt’s new assistant Jeremy is funny, for sure, if not pushing the bounds of unbelievable. We get some Ferguson action as well, but it just feels like not a lot happens. It’s not that it isn’t funny, but it just doesn’t compare to “Quick Hardening Caulk”.

“Valentine’s Day” is one of those strange Season 1 episodes where everyone is trying to figure out who they are. That’s not to say it is bad, or even the worst offender of the early Season 1 episodes, but it just doesn’t come together as well as an episode like “First Date”. Nick stranded at Julia’s office with Cliff is the high point of the episode. Jess’s attempt at a one night stand just isn’t that funny. This one is an easy pick.