The one word I would use to describe New World by David Jesus Vignolli is beautiful. The 2019 Will Eisner Best Graphic Novel nominee is gorgeous to look at and moving to read. New World is a folk tale rooted in the founding of America and the battle against colonization. The best way I can describe the genre is historical fantasy. It delves directly into the horrors of the time, but somehow doesn’t leave you feeling horrible. With fantastic art and a moving story, New World is a beauty to behold.

New World focuses on three different characters from vastly different cultures. The main character, Iracena, is a Native Indian fighting against the white colonization of her land. Amakai, a musician and African slave, is fighting for his own freedom from the white colonists. And finally Bartolomeu, a Portuguese sailor, is looking for redemption from past sins. The three of them unite as an unlikely trio to reckon with their new reality. 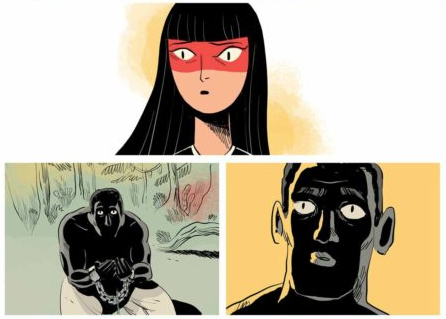 Any story focusing on topics of colonization and slavery has a fine line to walk. It’s easy to be too preachy or single-minded. The idea of making New World essentially a folk tale is the perfect solution. It’s very clear who the heroes and the villains of the story are, but that’s how folk tales work. And while some of the metaphors might be obvious, that doesn’t mean they aren’t sophisticated in what they are saying.

I say New World doesn’t make you feel horrible. By that I mean, it’s easy to make a white person feel shitty about colonization or slavery. And that isn’t necessarily a bad thing. But it’s a lot harder to acknowledge the horror, while also allowing for a path forward. New World doesn’t take it easy on the white invaders. They are the bad guys. They are literal monsters. But New World isn’t a work that is simply making white people feel guilty. It does what a lot of works don’t: it offers healing and forgiveness. That’s not to say there shouldn’t be shame over the past, but there must also be a productive way forward. 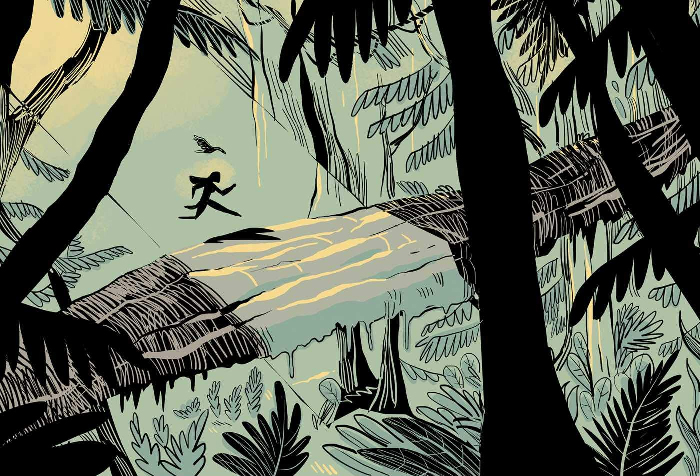 Undeniably, the strongest piece of New World is the beautiful art. I can’t express how much of a joy it was to read because it’s just so damn pleasant to look at. Everything from the layouts to the colors to the lettering just clicks.

Graphic novels tell stories through art and David Jesus Vignolli is clearly a master at doing just that. The panels often tell so clear a story, you could probably understand most of the comic without words. In fact, many pages contain no words at all. Many comic creators could learn from the “less is more” approach when it comes to dialogue. Let the images tell the story. Vignolli pretty much crushes it in that regard. 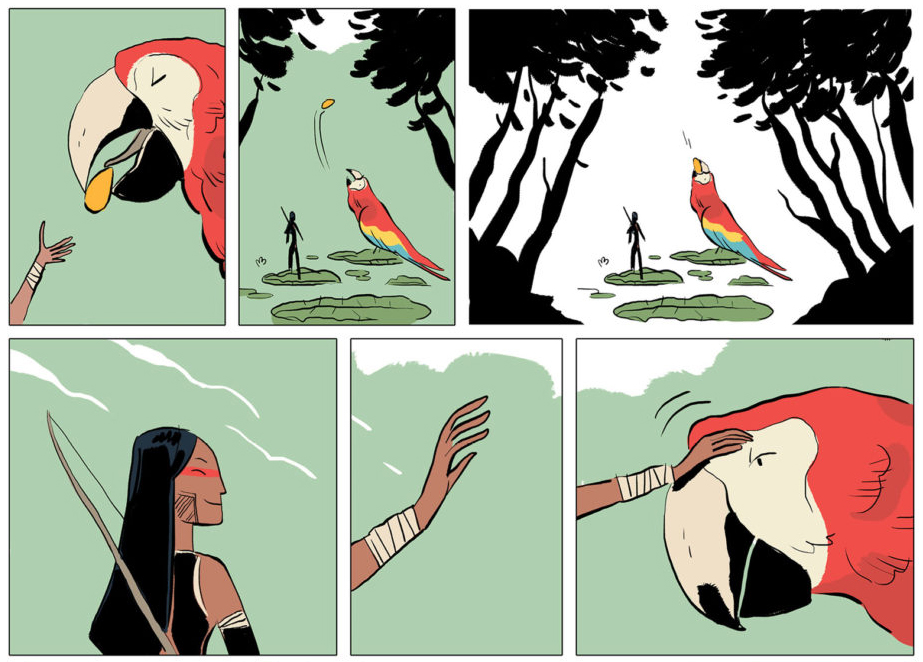 “Less is more” is the perfect way to describe Vignolli’s art style as well. I’m reluctant to call it “minimalistic” or “simplistic” because I feel that does a disservice to what is being accomplished. It only looks that way because it’s obvious that Vignolli is a master of his craft and is making something very hard look easy. The work is clean, colorful, readable, and as I’ve said already, beautiful. Every page is a work of art.

As I’ve branched into new genres of comic books, I’ve uncovered some fun little gems. Can you call an Eisner nominee a hidden gem? Doubtful. But personally, New World is my favorite yet. It provides an honest, thoughtful message delivered in a gorgeous package. What else could you want from a graphic novel? Go read this.