Now that we’ve really entered the meat and potatoes portion of this tournament, I’m going to give these write-ups a little more room to breathe. It’s been challenging to distill a lot of episodes into a few sentences. Even with this extra space, I’m probably not doing a lot of these greats justice, but that is life.

I do believe that this Divisional Final is an easy pick. “Virgins” is the clear winner. How can I so easily pick that episode over what could have been the series finale of New Girl?

“Five Stars for Beezus” is a great episode. It wouldn’t have made it this far if it wasn’t. But while I enjoy Nick and Jess getting back together, it always felt somewhat forced because the show might have been ending. Especially in this episode, Jess’s back-and-forth over confessing her feelings to Nick is more frustrating than anything to watch, considering she flew in from Portland to do that very thing. And Schmidt’s speech to Nick is a little contrived as well. It essentially boils down to “Hey dumdum, remember you are in love with Jess” and Nick is like “Oh okay.” 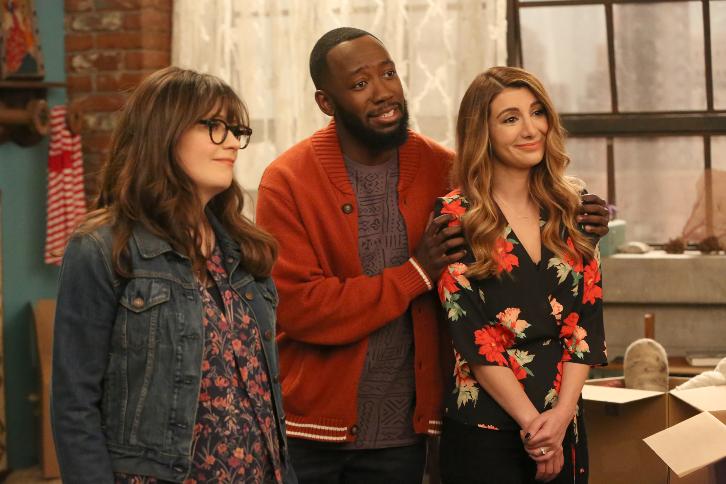 I’m not saying I hate it, because I don’t, only that it has some flaws and I think the Nick/Jess reunion could have gone over stronger if given different circumstances.

But let’s talk about the Schmidt/Cece pregnancy, because that is the true strength of the episode. In many ways, it illustrates how the show grew far beyond Jess and even Nick in the later seasons. I feel this is the true emotional moment of the episode. Yes, the pregnancy came out of nowhere, but that is often how it happens in life (versus confessing your love for your friend). And I loved how the show created a scene where Schmidt got to tell Cece instead of the other way around. It was a nice twist and felt like an honest and earned scene for the show.

“Five Stars for Beezus” is quality, but it has its weaker moments due to factors outside of its control. “Virgins” is a near perfect episode when New Girl was at its peak, which is why it’s the Division 1 champion.

This is easily the hardest pairing of the tournament, because I think both of these episodes are worthy of winning the whole thing. How do you choose between arguably the two most iconic episodes of the series?

Well, it’s me, so I just go with my gut, and that gut is telling me “Cooler” is advancing. As is tradition, let’s talk about the episode being eliminated: “Prince”. 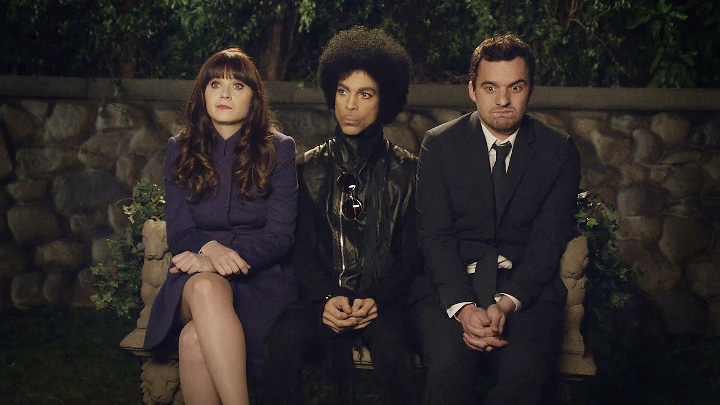 How can you not love “Prince” and Prince? The episode was pretty much created because Prince was a fan of the show (and that it was airing after the Superbowl probably played some role…). It’s so wild and out-there that it actually works for an episode of New Girl.

And pretty much everything in “Prince” works well. Coach and Winston’s “Fire and Ice” routine is great. Nick and Schmidt’s complete failure at replicating it is wonderful as well. Schmidt himself has a nice arc about wanting to use the party to elevate him to a new social level, while in the end realizing he cares more about his friends.

The biggest feature of the episode is of course Jess’s spiritual journey with Prince to discover whether or not she loves Nick. It’s all good fun with some supernatural Prince scenes rolled in. Of course, she ultimately tells Nick she loves him before the group sings and dances together on stage. It’s the definition of a feel good moment.

So how can I eliminate it? First, “Cooler” is probably going to win this whole thing, so that makes the debate easier. But if I was looking at “Prince” critically, it perhaps relies a little too much on “Hey look, it’s Prince!” than it does a deep story. Jess’s reluctance to tell Nick her true feelings was always a bit odd and most everyone else is just there to flesh out the episode. Again, it’s all great, but there can only be one winner. “Cooler” is your Division 2 champion.

Can a choice be both tough and easy at the same time? “Katie” is being crowned champion of Division 3, but I’m really going to miss “Clavado En Un Bar”. It is lowkey an amazing episode of New Girl.

Any episode where the gang sits around and shares stories is pure gold. We get a heavy focus on young Nick and young Schmidt, both of which are hilarious. Nick’s ever-changing looks and demeanor through school, including some never before seen looks, is great. The big reveal, of course, is that Nick actually passed the bar exam but chose to be a bartender. It’s a nice little addition to his character.

And Schmidt’s flashback is downright perfect. The absurdity of working for some Christmas tree mob boss only to learn it truly is all about the money fits Schmidt perfectly. When Jess tells Schmidt the museum job pays more, his response is classic: “Wait, the — Then what the hell are we talking about here, you guys? Done deal, case closed.”

Winston’s flashback, in which he discovers he’s never made a decision in his life, is both funny and noteworthy. Not to get too deep, but I think many people can relate to Winston and the feeling of life just happening without any control.

There is a lot to love about the episode and it is one of my favorites. So how can I eliminate it? Well, I would say that “Clavado En Un Bar” is essentially the weaker version of the episode “Virgins”, which has advanced already above. And while the episode is hilarious, it is ultimately inconsequential to the greater series. That doesn’t make it any less great, but it isn’t beating out “Katie”.

I cannot believe a Ryan episode made it this far. I’m a shocked and somewhat appalled. How could I do this to myself? Undeniably, “Injured” is the champion of Division 4, but let me explain how “Teachers” made it as far as it did. 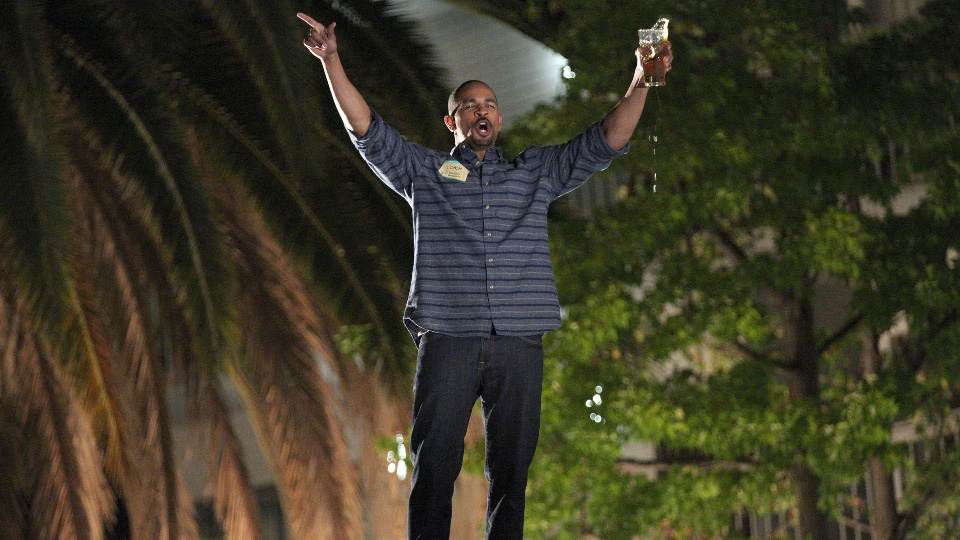 First, Coach as a teacher worked insanely well. Yes, he was always a coach, but when he was moved into the role of elementary school teacher, his character clicked. And as much as this episode is about Jess and Ryan, it is just as much about Coach grappling with the overwhelming responsibility of teaching children. He also has so many great one-liners in the episode. “I sit bitch or I don’t sit at all.”

The Ryan and Jess dynamic is at its best in “Teachers” as well. They are allowed to be more than just Jess oogling Ryan awkwardly. I still never liked that Ryan literally tutored his younger dyslexic sister, but at least they called out how stupidly perfect he is. 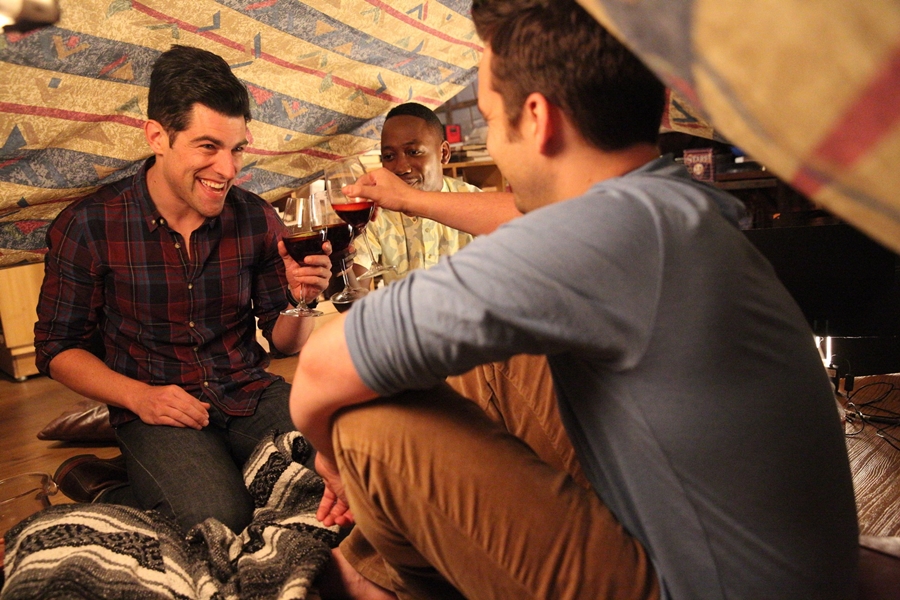 I would be remiss if I didn’t at least mention the Nick/Schmidt/Winston guys weekend, which is also a strong part of the episode. I love the idea of a stereotypically “guy” weekend devolving into building forts, drinking sangria, and talking about love.

It’s a very complete episode with funny plots for everyone. It might have benefited from some weaker match-ups, but it’s no fluke it advanced far in the tournament. But this is the end for “Teachers” and “Injured” is the Division 4 champion.