“Background Check” has finally met its match. It’s a great ensemble episode. Nick trying not to lie is always a good place to mine for laughs. Coach trying to pick up a young boy is a quick, hilarious side plot. But there is also the absurdity of the not-meth plot that stretches disbelief. It made it to the Sweet 16, so it’s a good episode, but it doesn’t beat out the Season 6 finale.

I love “Clean Break”, which makes this an especially difficult elimination. If there is one thing I discovered through this tournament, it’s how much Coach brings to the show. And “Clean Break” is his goodbye and it is executed to perfection. Schmidt and Cece’s engagement also works well, despite its impromptuness. The highs are high. But the Nick/Jess sex cup plot is middling and at this point in the tournament, that is enough to get eliminated. “Virgins” is the quintessential New Girl episode and isn’t dropping out here.

Episode Match-Up: “Cooler” vs. “The Landlord”

“The Landlord” is a great Season 1 episode. It’s undeniably funny and it pretty explicitly pushed the Nick/Jess will they/won’t they story forward. But it also suffers from the faults of Season 1, such as having nothing to do for Winston. It’s a favorite of mine, but it can’t compete with “Cooler”. 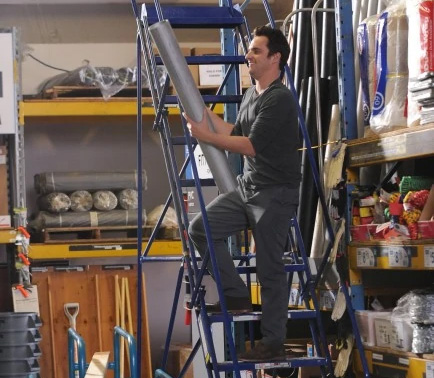 I love puns and “Quick Hardening Caulk” is full of them. The Jess and Nick post-kiss story takes center stage and is executed perfectly. Even the Winston and Schmidt side plot where they search for an exotic fish works well enough. I’ll never not crack up at the aquarium staff member who happens to have an extra fish hat. But the episode is ultimately a piece of a larger puzzle, whereas “Prince” is iconic.

“Menzies” is great. And for all of the weird stuff that happens, like Tran and Nick in the pool or Schmidt and his boss entering into a sex contract, the funniest parts (as always) are the quiet moments between the gang. When Winston explains to a recently enlightened Nick that he has PMS, you can’t help but laugh as Nick tries to not immediately fall apart again. It’s all funny stuff and where New Girl is really starting to hit its stride. But it ultimately can’t live up to “Katie” from slightly earlier in the same season.

“Landing Gear”, for lack of a better phrase, nails the landing. The last 5-10 minutes of the episode is great. The loft wedding is short and sweet. Jess and Nick’s conversation about Nick and Reagan is poignant. It’s good stuff. But the rest of the episode mostly feels like build-up to that climax and is surprisingly forgettable. And as much as I love season finales, I probably love the gang sitting around and sharing stories more, which is exactly “Clavado En Un Bar”.

Two Season 1 episodes up against one another in the Sweet 16. But there can only be one and that is “Injured”. “Thanksgiving” is one of the better early season New Girl outings. Justin Long is a great guest star and the episode hits all the right notes. His conflict with Nick isn’t overly aggressive and Jess and Nick’s “Big Time” argument is hilarious. But in the battle of Season 1 episodes, I think “Injured” is the clear winner.

This might be the only real upset of the Sweet 16, but “Fluffer” is being eliminated. It’s a fantastic Jess and Nick episode that really starts to peel back the layers of their relationship. Nick’s back and forth and then ultimate acceptance of his role in Jess’s life is fascinating to watch. The real downfall of the episode is a weak B-plot, that of Schmidt impersonating a Romney. It’s not even bad, per se, it just doesn’t live up to everything else. “Teachers” is surprisingly strong from start to finish and that is why its moving forward.