We start off with a battle of holiday episodes. “Thanksgiving III” is a fun camping twist on their Thanksgiving tradition. Everything involving the dead fish makes me want to gag, but maybe in a good way? Plus, Coach! But I love Halloween and “Halloween” even more. All the characters have good stories and Robby is at his best. It’s hard to beat Nick’s completely random Bea Arthur costume.

Episode Match-Up: “Shark” vs. “The Curse of the Pirate Bride”

Look, an episode like “The Curse of the Pirate Bride” should be up at the top. I love all the characters and this episode is the culmination of pretty much everything on the show. But I have to admit it just doesn’t resonate like the earlier episodes of the series. I’m not saying it’s bad or unfunny, but it is hard to live up to an episode like “Shark” when New Girl was firing on all cylinders.

“House Hunt” is a funny episode that sets up the status quo for the remainder of the series. I’ll never not laugh at the idea of Schmidt and Cece touring and “buying” a house that was never for sale. This is good stuff. But “Cooler” is a favorite in the tournament and it isn’t losing out here.

Would you like to join my network? “Par 5” has some great lines, but its weakness is probably in the Winston/KC plotline. “A Chill Day In” continues to be a favorite of mine with much bigger laughs than something like “Par 5”.

Winner: “A Chill Day In” 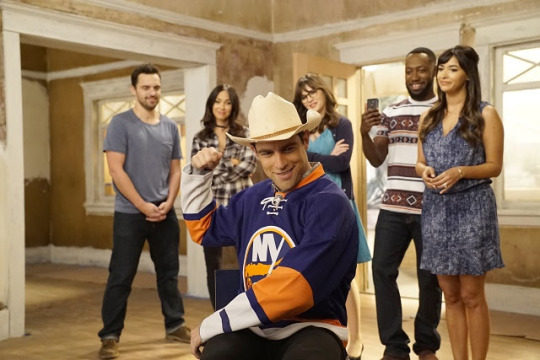 Episode Match-Up: “Raisin’s Back” vs. “The Cubicle”

Back-to-back episodes face off! Episodes 11 and 12 from Season 6 feature Reagan returning to the cast and the antics therein. I think “Raisin’s Back” is clearly the superior of the two. “The Cubicle” has its moments, but this is the beginning of what I like to call the Ruining of Robby. I loved early-Robby, but this later arc contradicts most of the things we’ve learned (and loved) about Robby.

Neither of these episodes are amongst the New Girl greats. The neighbors in “Neighbors” are the worst, mostly by design, but it doesn’t help anything. By the end of the episode I’m on Schmidt’s side. “Micro” also contains an incredibly hate-able character, also by design, that of Matt with the micro-penis. The latter episode is weaker overall I would say, so this one is going to “Neighbors”.

Episode Match-Up: “The Landlord” vs. “Eggs”

“The Landlord” is one of my favorite episodes from Season 1. It’s probably the most explicit will-they-won’t-they between Nick and Jess thus far in the series. Remy is just a great creepy character as well. “Eggs” is an entertaining Season 2 episode, but it’s one of the weaker ones from a very strong season. Drunk Nick is always funny, but doesn’t quite hit the highest of highs. This episode also marks the unceremonious end of our first Robby arc, which is a bummer. It starts Cece’s “I need to get serious about a relationship” arc, although after Season 2 it’s promptly forgotten.

I can’t say I love either of these episodes, despite loving the cast of characters. Bill Burr is great in everything, but the underlying plot of “Bob & Carol & Nick & Schmidt” is a little far-fetched, despite the antics that occur. I’m a Reagan apologist, but the self-titled episode feels like one long introduction to the character and less like an episode of New Girl. Both episodes have your typical New Girl hilarity, but I think “Bob & Carol & Nick & Schmidt” is stronger when it comes to the “heart” of the show.

Episode Match-Up: “Control” vs. “The Apartment”

“Control” has some high points, specifically with the realization of how important Schmidt’s neurosis are to the loft dynamic. It’s also our first real look at Nick’s general weirdness about money. But I think “The Apartment” is the clearly superior episode of the two. How can you not love Dunston?

“Naked” might be the first episode of the series that really begins to feel like New Girl. Jess is still a bit off, but she is coming into her own. Winston gets really weird. Nick has body issues. Things are starting to click. Plus, Lake Bell’s Amanda is hilarious. But, come on, how can it compete with “Prince”?

I love “Swuit”. It’s such a perfect Nick and Schmidt storyline. Throw in Jess playing the two against each other for their own good by throwing in some “man problems” and you have a great episode. “Cece’s Boys” is a strong episode as well, with Jess and Reagan attempting to recruit new models for Cece. Plus it has one of the more memorable scenes of the show, in which the guys go to war — I mean, get Brazilian waxes. “Swuit” might not hit the high of that single scene, but it’s stronger overall.

This is another tough match-up. “Road Trip” is a funny episode, but definitely the weaker of the rare two-parter. But the climatic battle scene is great and Nick struggling with his emotions is always funny to watch. “Wedding” is another strong early Season 1 episode, but still feels like it’s trying to work out the kinks. I say they are about equal in terms of laughs and heart, so I’ll go with “Road Trip” because the characters are who we’ve grown to love.

Listen, I love New Girl. I wouldn’t be doing this insane tournament if I didn’t. But these two episodes are tough because neither are that great. Both episodes have their funny moments, but both have some really annoying aspects. The kids in “Young Adult” are so hateable I wonder why Jess would even worry about being cool. And in “Cece Crashes”, Cece is downright obnoxious (and out of character) in trying to start something between Nick and Jess. It’s hard to say which one is stronger, so I’ll once again go with the episode featuring the more fully formed characters.

“Quick Hardening Caulk” is a great episode in the post-kiss-pre-relationship arc of Nick and Jess. It’s one of my favorites because I’m a sucker for puns. “Oregon”, despite the unique setting, is a weaker episode. You’ve heard from me already on this, but I never cared for the Ryan storyline and this episode writes him off as a selfish jerk. It has some nice laughs, like the shocking similarities between a young Zooey Deschanel and Jared Leto, but can’t match up with the earlier episode.

There are a lot of tough match-ups in this division! “Sam, Again” has a lot to love. The character storylines weave together well. Nick and Cece being quarantined and bonding over a bizarre kids TV show is great. Hippie Sam battling his inner self is hilarious. But “First Date”, while perhaps not as funny, might be even better. It comes from that golden era of New Girl where the show could do no wrong, whereas “Sam, Again” (as the title suggests) feels a bit like a retread.

“Valentine’s Day” is an episode surprisingly loaded with guest stars. I love Lizzy Kaplan, but Clark Duke as Cliff really shines in this one. “Christmas Eve Eve” works fine for what it is, a later season Christmas episode. There is some good tension between the characters and the always funny moments, but it can be a little eye-rolling at times. My favorite part is probably Winston and Schmidt having to go to a *gasp* store! But in the battle of holiday episodes, “Valentine’s Day” is advancing.