It wasn’t long ago I looked back at Maximum Carnage and Venom: Lethal Protector. Both series, published in 1993, predominately feature Venom, one of the hottest characters around. And I’m not the only one nostalgic about the Venom stories of my youth. A Venom movie is in the works which is reported to be heavily based on Lethal Protector and Planet of the Symbiotes.

While I own the collected Lethal Protector story, Planet of the Symbiotes has always been somewhat a mystery to me. I never owned more than a single issue, which also happened to be an odd flipbook containing two stories. So, with the pending Venom movie, what better time than now to revisit Planet of the Symbiotes?

Published in 1995, Planet of the Symbiotes was a Spider-Man/Venom/Scarlet Spider crossover published confusingly as five “Super Specials”. I’m convinced it was published this way purely to have five “first issue” comics. It’s just one of the things that makes the story so incredibly 90s.

Despite being a crossover, Planet of the Symbiotes is very much a Venom-centric story. Spider-Man is there because, well, he is Spider-Man and tends to show up in Venom stories. Scarlet Spider (one of the current clones of Spider-Man) is around too, mostly because he was also popular at the time. But make no mistake, the story itself is pure Venom.

The crux of the tale is Eddie Brock questioning his symbiotic relationship with the Venom symbiote. Brock has begun to suspect that the symbiosis may not be mutual, but instead turning him into an increasingly violent man. This leads Brock to disconnect and shun the Venom symbiote. Then things get super 90s.

When Eddie Brock separates from the symbiote, a darkness falls upon the world. Comic books in the 90s were all about being dark and edgy and this story doesn’t hold back. Some of what is depicted, such as above, is still unsettling today.

And then there is Eddie Brock’s transformation into a human commando. Yes, he was always a big scary dude, but his background is sports and journalism. Apparently after a few years of hanging out with alien symbiotes, you look like this:

There is so much to say about this image. The art is an odd amalgamation of Rob Liefeld and Frank Miller, both quite relevant and iconic at the time. Every proportion is exaggerated, every line given a few more lines than necessary. It’s gritty, violent, and downright ridiculous. Is his shirt exploding?

Other cultural influences are immediately recognizable, even 20+ years later. The alien symbiote planet visited by the heroes obviously takes its cue from the Alien franchise and the work of H.R. Giger.

And let’s not forget the alien symbiotes have a Stargate. The Stargate film was released the previous year and apparently Marvel had no qualms about literally calling the device a Stargate.

So how is the actual story? 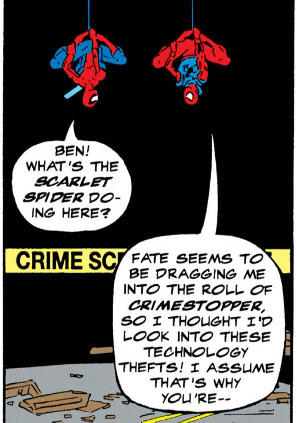 What I have found with a lot of comics from the 90s is that the idea of the story sounds a lot better than its execution. Planet of the Symbiotes is about Eddie Brock questioning his role as Venom and ultimately facing his largest (figurative and literal) fears. In the end, he has a renewed sense of self and duty as Venom. It’s a story worth telling. In practice, it suffers from a lot of common 90s tropes, but still lovable for what it is.

As alluded to above, Spider-Man and Scarlet Spider are just here to up sales. That isn’t necessarily a bad thing. I thought it was fairly unique how the Venom symbiote disguised itself as Scarlet Spider’s hoodie. I also simply like the two characters and it’s hard to complain watching them interact with Venom. But they don’t add much to the story. They are there to add some extra color to the pages, but it is a comic we’re talking about.

The plot feels especially disjointed considering there is a single writer. Having five different art teams with a wide range of styles doesn’t help either. Some of this could have been a conscious decision, what with having the story take place in five distinct specials. Perhaps each was meant to feel somewhat self contained but part of a greater whole? Reading them back-to-back leaves you with a little whiplash.

I also can’t help but laugh at the enormity of the tale trying to be told versus the abilities of the Spider-Team. Alien symbiotes eventually make it to Earth and begin to take control of the entire population. We’re talking global invasion. Captain America is taken over by an alien. This is world ending shit folks. Cut to Venom, Spider-Man, and Scarlet Spider trapping a few alien symbiotes in a sewer. Good work guys!

Oh, and also, Carnage is around and he’s like, gigantic.

Apparently he’s been absorbing the alien symbiotes which causes him to grow physically large. Because that is a thing now.

Despite all of the carnage (see what I did) the ending is a bit lackluster. The symbiote invasion is ultimately destroyed from a psychic shriek produced by Eddie Brock and Venom re-bonding. The genocide doesn’t go unnoticed, but it’s swiftly passed over. Gosh darn that Venom!

Again, I have to say that the general overarching story is a good one and I can see why it would be part of a Venom movie adaptation. We see an entire character arc of Eddie Brock. We learn about the origins of his symbiote. He faces physical and mental challenges. This is all good stuff and, fingers crossed, can be adapted into a strong story.

Planet of the Symbiotes is a 90s Spider-Man Comic

Symbiotes, clones, and Mary Jane sitting at home worrying about Peter. It’s a 90s Spider-Man comic through and through. Planet of the Symbiotes might only be lovable through a nostalgic lens, but if you grew up with Venom it’s worth a quick read. Despite all the bombast, it’s a character story about Eddie Brock and his complicated relationship with the Venom symbiote. Peel back a few layers and you’ll find a story worth reading.

Looking for more 90s Venom? Check out my list of best Venom comics ever published. You’ll find a few other gems worth taking a look at.