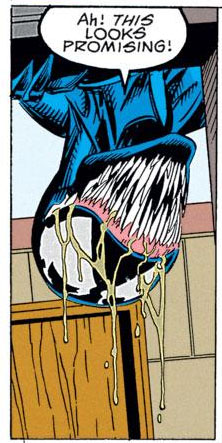 Growing up in the 90s, Venom oozed cool. He was like Spider-Man, except stronger and more vicious. Spider-Man taught you to turn the other cheek and be better. Venom spoke to the darker part in you that just wanted to shut the “bad guys” up for good. Much like Punisher before him, Venom is a true anti-hero.

I took Lethal Protector everywhere with me. I specifically remember keeping it close to my chest during a hot Fourth of July. We were at a family friend’s lake house for a big party and I was glued to this comic. The only time I separated from it was during a boat trip. I didn’t want it to get wet! Thankfully, a kind adult stood guard on the coast.

Whereas Maximum Carnage was always a treasure hunt for me, Lethal Protector was whole and complete. A story focused on Venom, but containing Spider-Man, The Jury, and even more Symbiotes. Frankly, it was awesome. Even today, when I picture Venom in my head, Lethal Protector is what I see.

How Does It Hold Up?

I recently reread the six issues series to see how it held up. Would it be as cool as I remembered? Or would it be an embarrassing retreat into nostalgia?

I’m happy to report that Venom: Lethal Protector holds up well, considering the era of comics it came from. The weakest part is the dialogue, which is not uncommon in the 90s. I began to laugh at how many times Venom said (after seemingly being defeated) something along the lines of, “Your talking gave me enough time to recover!” Eye-rolling lines are fairly common place.

The plot itself is serviceable, that of an outsider trying to find acceptance. Eddie Brock moves to San Francisco in hopes of finding a home. It isn’t long until Spider-Man shows up, not trusting Venom to stay out of trouble. The story is clear enough and moves forward at a good clip (unlike Maximum Carnage). Spider-Man is there to sell more issues and mostly just causes problems instead of helping anything.

But comic books weren’t selling in the 90s because of story, they were selling because of amazing art. Simply put, Mark Bagley and Ron Lim put on a fucking show. Each artist draws three gorgeous issues. I am a Ron Lim fan, but Mark Bagley is the true hero here. His artwork is downright iconic. Even the most simplistic panels are amazing to look at. For example, this shot of Spider-Man on a white background:

Ron Lim certainly holds his own, but you can tell the second half of the series is not as strong as the first. Bagley’s work defines Venom for years to come. His work is unmistakable, yet somehow not overpowering. Mark Bagley was made to draw Spider-Man and Venom and Lethal Protector is the perfect showcase.

Venom: Lethal Protector is not as bombastic as Maximum Carnage and that is a good thing. It is tighter, more grounded, and consistently prettier. Spider-Man and Venom fans, at the very least, should flip through the series to enjoy the art. You won’t regret it.

If you’re looking for more Venom goodness, check out my list of best Venom comics ever published. It includes Lethal Protector, Maximum Carnage, and other Venom classics.

Venom (Eddie Brock) – He is the main guy. Joined by an alien symbiote, he returns to San Francisco to make a new life for himself. Things don’t go as smoothly as planned. Doesn’t mind a good killing, but only for those who deserve it.

Spider-Man (Peter Parker) – Doesn’t get along well with Venom. When he hears Venom is in San Francisco, he hunts him down to make sure he is being good. He acts heroically, but ends up being a pain in the ass.

General Orwell Taylor – Back when Venom was more of a jerk he killed Taylor’s son. Now the General is determined to get his revenge. He puts together a team of mercenaries to take down Venom. They are called…

The Jury (Screech, Firearm, Sentry, Bomblast, Ramshot) – Assembled by Orwell Taylor to defeat Venom. Hellbent on revenge, they also came up with comical names for themselves. “Let’s take this son of a bitch down, but I want to be known as Ramshot, okay!?”

Issue 1 – Venom returns to San Francisco to start a new life and become a hero. Spider-Man is skeptical and follows him. They fight some thugs. Venom friends some homeless people and goes underground. Diggers (big digging mech things) attack. Venom and a Digger fall into an underground city.

Issue 2 – Venom defeats the Diggers in the underground city. The city council votes Venom out, because he’s been mean in the past. He decides to take out Treece (who is sending the Diggers) so the city council will change their minds. Spider-Man goes to talk to Venom’s dad, Carl Brock. The Jury attacks Venom for killing Orwell Taylor’s son.

Issue 3 – The Jury continues to attack Venom. He tries to escape. Spider-Man talks to Sharon Dempsy, Carl Brock’s housekeeper, about Eddie Brock’s past. Spider-Man feels feelings. Venom continues to fight The Jury until Treece’s people intervenes. Treece offers Venom a job, which he accepts. They capture him instead.

Issue 5 – Eddie is not dead and escapes. Spider-Man battles five new symbiotes. Eddie joins the fight. They subdue the symbiotes using an aging accelerator. Treece is upset and blows up the joint. Spider-Man and Venom escape, heading back towards San Francisco.

Issue 6 – Venom learns of Treece’s plan to blow up the underground city (because gold). Venom tries to stop Treece, but Spider-Man intends to stop Venom (because Spider-Man is uneducated as to what is going on). Venom convinces him to help. They stop Treece and the Diggers. Venom escapes and Spider-Man goes home. The underground people invite Venom to live there.

2 Replies to “Why Venom: Lethal Protector is Beautiful”