Time travel is my favorite genre of fiction. It allows us to examine the consequences of our choices and the questions of free will. From the silly to the complex, I find myself invested in how storytellers interpret the concept. How does time travel work? And does the story adhere to the established rules? The answers are always fascinating.

Because I love time travel so much and because this is my website and I can do what I want, I decided to create a series of articles looking at the various types of time travel fiction. Each article will focus on a specific “genre” of time travel and the film/television/literature set within. Some stories will fall into various genres, so I’ll do my best to make the most sense of them.

I wanted to do something a little different for this time travel article. In previous entries, I examined multiple stories within one genre, comparing how they adhere to a single time travel construct. For this article, I will focus on a single story. We’ll touch on some influences, but I wanted to delve deep into one specific episode of television.

Why? Because it is my favorite episode from one of my favorite television series. LOST haters beware, I bring you…

My love of The Constant, the fifth episode of LOST‘s fourth season, is not unique. The episode itself is universally adored among LOST fans and for good reason. It’s a great, emotional episode of television. It also just so happens to include time travel, and specifically, the concept of being “unstuck in time”.

What does it mean to be unstuck in time? It is when your consciousness travels between various points of your existence, usually outside of your control. One day you’re eating breakfast and suddenly you’re reliving your military service (an oddly common theme in this genre). Your body isn’t traveling, simply your consciousness.

The idea of being unstuck in time was unquestionably popularized (if not invented) in Slaughterhouse-Five by Kurt Vonnegut. In the novel, Billy Pilgrim hops around between various points in his existence, notably the firebombing of Dresden and a bizarre alien zoo. The book never explicitly states if Billy Pilgrim is actually time traveling or merely crazy, but that isn’t really the point. Many of the best time travel stories aren’t about time travel at all, instead about the characters and their experiences.

Whether or not Billy actually time traveled or not, the concept of being unstuck in time undeniably influenced LOST. Without Slaughterhouse-Five, there is no The Constant.

DESMOND: What does this do?

DANIEL: This, if the numbers you gave me are correct, what this will do is unstick Eloise in time. Just like you.

The Star Trek: The Next Generation series finale, All Good Things…, is the definition of an “unstuck in time” story. Captain Picard finds his consciousness hopping between three points in time. In each timeline, he must get the Enterprise to a specific location. What is on the line? The fate of existence as we know it, naturally.

The episode itself is fantastic and could be a whole article of its own, but it is also a noted influence for The Constant. According to the audio commentary of The Constant by Carlton Cuse and Damon Lindelof, All Good Things… played a key role in the development of the episode.

It’s easy to see how. Both tell the tale of a man uncontrollably jumping through time in which he must complete a mission. And more importantly, both are used to tell stories about not just the protagonist, but the characters in their lives as well. Flashing back without a flashback.

No, this is not amnesia

Let’s put influences aside and really dig into The Constant. The episode follows Desmond Hume as he flashes between 2004 and 1996. As one would guess, flashing between the time periods is not conducive to a healthy lifestyle and if it doesn’t stop, Desmond will die. The only way to prevent his untimely (ha!) death is to make contact with his “constant”.

The idea is that for Desmond to re-anchor himself in time, he needs to find something familiar to him in 2004 that is also important to him in 1996. For Desmond, of course, that constant is Penny. Unfortunately, back in 1996, Desmond and Penny aren’t exactly on the best of terms. And let’s not forget in 2004 Desmond is trapped on a mysterious freighter in the Pacific.

The episode is a “mission in the past” with a few twists, most notably Desmond’s flashing between two timelines. Furthermore, his consciousness is that of 1996-Desmond. It is in 2004 that he is disoriented and confused by his surroundings, not 1996. But despite both of these issues, he very much has a mission to complete in 1996: Convince Penny to answer his phone call 8 years later.

The whole episode is built around completing this mission and the many ticking clock deadlines. The biggest ticking clock is that Desmond is slowly being killed by the flashes. Another is that the further Desmond deteriorates, the faster the flashes occur, making any “mission” more challenging. Not to mention that in 2004, Desmond and Sayid are doing their best to outmaneuver the freighter folk. On top of everything is Desmond spouting hard-to-believe time travel shenanigans. Given all the deadlines and obstacles, getting in contact with Penny in 2004 sounds downright impossible.

But against all odds, Desmond gets his chance to make contact with Penny. But will she be on the other end of the call? It’s a beautiful story that leads to arguably the most emotional scene in all of LOST:

Everything about this scene is amazing. It builds anticipation. Is the number still Penny’s? Will she answer? How many times will this damn phone ring before it goes to voicemail?! And when Penny finally does answer, you are hit with a wave of emotions. Not only does this mean that Desmond will be okay, but this is the first time he has spoken to Penny since he was stranded on the island. It also means that Penny had enough faith in 1996-Desmond to wait for his call. We also see the slow understanding of Desmond’s consciousness returning to the present. He remembers where he is and what is going on. Even his acknowledgement of Sayid at the end is touching. His semi-reunion with Penny is brief, yet cathartic. I cry like a baby every time I watch.

Why can’t Daniel be Desmond’s Constant?

This is Time for Time Travel, so we have to discuss the temporal mechanics a bit. The most gaping plot hole is why can’t Daniel be Desmond’s constant? Wouldn’t that make everything so much easier? Daniel is the one in 2004 that instructs Desmond to find 1996-Daniel. And indeed, Desmond does find 1996-Daniel who explains the concept of a Constant.

Daniel: Something familiar in both times. All this, see this is all variables, it’s random, it’s chaotic. Every equation needs stability, something known. It’s called a constant. Desmond, you have no constant. When you go to the future, nothing there is familiar. So if you want to stop this, then you need to find something there…something that you really, really care about…that also exists back here, in 1996.

Going strictly be that definition, we can begin to answer why Daniel cannot be Desmond’s constant. You see, it has to be something (or someone) you really, really care about. Daniel, both in 1996 and 2004, is someone Desmond just met. They don’t have the connection to build the level of familiarity needed to “stick” Desmond back into time. The only person that can truly do that is Penny.

And I think that explanation would make everyone happy if it wasn’t for this: 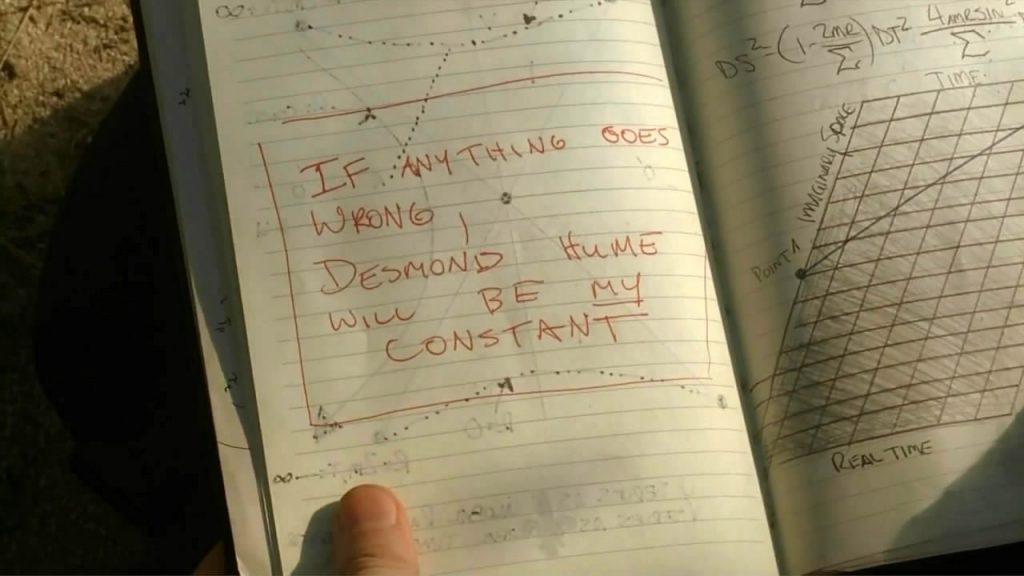 Eh… What the fuck?

Okay, so, Desmond is Daniel’s Constant, but not the other way around? I believe that this shot of the notebook was intended to illustrate Daniel’s memory loss and show these events did happen (versus Desmond changing the past, alternate timelines, etc.). In LOST, whatever happened happened. That is a constant (ha!) theme throughout the show. I think this shot is simply a way of reinforcing this idea.

But it also makes it much harder to justify Daniel not being Desmond’s Constant. Maybe Daniel just cares a lot more about Desmond? Desmond is the one that helped 1996-Daniel with his Eloise/rat maze. Or, you could argue that because we were dealing with the consciousness of 1996-Desmond, that Daniel (both times) is just a stranger, but 2004-Desmond is not a stranger to Daniel.

You can perform a few of these mental gymnastics to make the Desmond/Daniel Constant argument somewhat work, but it’s a stretch. Like a lot of mysteries in LOST, the burden of explanation is put on the audience. Furthermore, it could just be a poorly executed idea.

I really want to emphasize that the idea of a Constant is ingenious.  How do you stop someone from floating around through various time periods? You need an anchor. It’s great. And I would argue that for 99.9% of the episode, LOST pulled off the concept perfectly. Then they had to throw in a little razzle dazzle at the end and ruin everything!… Okay, it isn’t really that bad. In fact, it’s a perfectly LOST thing to do.

I’ll see ya in another life, brother!

Slightly murky time travel mechanics aside, The Constant is a work of art. The final call with Penny resonates with anyone who has ever loved someone. Storytellers sometimes overuse the often corny notion that “love conquers all”. But when a story makes you believe it as The Constant does, love feels more important than ever.